Chapel is all about 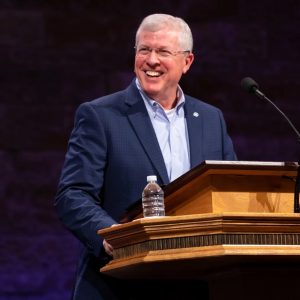 Lindsey, his high school sweetheart, and Joe celebrated 45 years of marriage this past June. The Allens have two married children, who both serve in vocational Christian ministry, and three grandchildren. Joe serves as the Chaplain at DTS and during his down time enjoys playing with the grandkids and watching University of Georgia football. Go DAWGS! 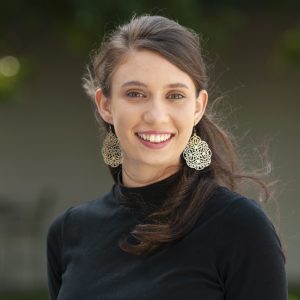 Paige has been with DTS since July of 2021 and considers her role to be an absolute blessing! Paige loves people deeply and desires especially to see them thriving in the places where the Lord has put them. To that end, she aspires to use her role to support others faithfully behind the scenes.

Paige grew up on an island off the coast of Brazil since her family served as missionaries. She later when on to the Philippines, being highly invested in the restoration of people facing deep injustices. She currently pursues a Masters in Counseling Ministries here at Dallas Seminary in the hopes of spending a lifetime of service to people in high risk communities and crisis.

Paige thrives in any place where beaches, sunshine, fresh coconut water and tropical islands can be found. She is an adventurer at heart. More importantly, however, she is an avid believer of going where God leads. Ultimately, her greatest delight is in finding daily joy from the presence of the Lord. 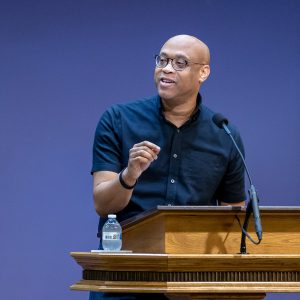 Patrick has been involved in church music for more than 30 years and is a musician, singer, songwriter & producer.  He also has a passion for sharing the Word of God and began his public preaching ministry in December 1997.

Patrick relocated to Dallas in order to attend DTS, where he graduated with his ThM in 2004. Patrick has been with Reunion Church in Dallas since 2001, where he currently serves as the Associate Pastor and Elder. He also serves here at DTS as the Director of Chapel Music and Worship.

Patrick is married to Tiffany, and they have been blessed with 4 children – two boys and two girls: Nehemiah, Judah, Benjamin, and Esther. 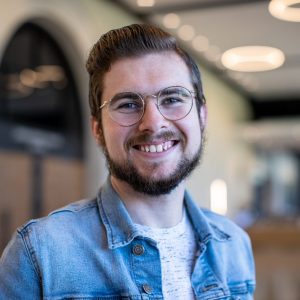 Josh has been blessed to be a student at DTS since 2019 and involved with the chapel team since 2021. From a young age, he has had a passion for equipping people to worship the Lord well through both music and through careful study of Scripture. As the chapel musician coordinator, he can do both as he helps prepare the worship bands to lead the campus in faithful and uplifting praise to our God in chapel.

Born and raised in Columbus, Ohio, Josh received his bachelor’s degree in Biblical Studies from Cedarville University and is currently pursuing his ThM with a focus on Systematic Theology here at Dallas Seminary. His passion is to help the church more fully integrate theological knowledge with a missional mindset, to serve the Lord in Spirit and in truth!

In his spare time, he loves checking out the Dallas music scene and enjoying all the coffee the city has to offer! 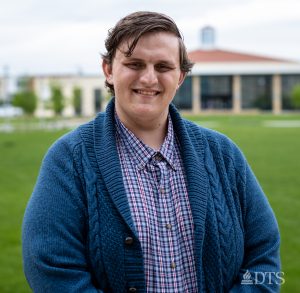 The 2022-2023 Presidency of the Spiritual Life Board is held by Jeremiah Mavrogeorge who was elected by the student body earlier last year. Jeremiah is originally a native of Fresno, CA and has a penchant for apologetics, reformed theology and memes. He currently resides in Dallas, TX and pursues the Master of Arts in Apologetics and Evangelism.

Jeremiah hopes to create a holistic spiritual life on campus aimed at not only reflecting God here at seminary, but also aiming to encourage students to live a holy life as stated by St. Peter. “But just as he who called you is holy, so be holy in all you do; for it is written: ‘Be holy, because I am holy.'” (1 Peter 1:15-16) Jeremiah hopes to encourage students by giving spaces to encourage spiritual growth and by the Spiritual Life Conference that will create Christ-likeness not only in his classmates, but in himself.

The Spiritual Life Conference 2023 will be held January 24-27 on the Dallas Campus. More details to follow.

Chapel attendance is expected for all students enrolled in a Master’s Degree or Certificate Program. Those enrolled in Spiritual Formation, internships or thesis are also required though Doctoral, DTS en Espanol and MABEL students are exempt. Below are the amount of chapels that must be attended based upon the credit hours students are taking.

Up to 5 credit hours – 8 chapels required

How to Report Chapel Attendance?
Students who are required to attend chapel must report their attendance at the end of each semester via Canvas. Access will be granted to students mid semester for chapel reporting.
Extension and Online Students
Students who attend extension sites or online can complete their requirements with any combination of live and online chapels. For greatest benefit, however, on-campus attendance is encouraged for interaction with the DTS family.
View Online Chapels
What about the World Evangelization Conference?
The World Evangelization Conference (WEC) is a huge event led by students each Spring on the Dallas Campus. Students required to attend chapel must also join each plenary session and report at the end of the semester on Canvas.
View WEC Website

Where do I watch chapel online?

Watch our chapels live at this link: https://www.dts.edu/live/.

Viewers can also find our chapel messages posted on the DTS YouTube channel, Spotify, and iTunes.

How do I report my chapel requirement?

Students will be able to submit their requirement response in Canvas. There will be a course invite sent out to all required students after the semester begins. Please follow the prompts to respond either “yes” or “no” to fulfilling the entire requirement. We expect students to submit their responses truthfully.

How much detail do I give with my report?

Students need to simply select “yes” or “no” to meeting their full requirement. Paper reports, notes, and specific chapels attended are not necessary. Chapel is intended for the community benefit and refreshment of the student body, not as an assignment.

When is my requirement due?

For the Spring 2023 Semester, all responses are due May 11, 2023. You will only need to submit your chapel requirement once by the end of the semester.

What is my requirement for WEC?

Does WEC count towards my chapel requirement?

WEC is separate from your chapel requirement. This means you need to complete your full requirement for chapel, plus attend all three WEC plenary sessions, at minimum.